Unable to add a new connection

I am unable to add a new connection to my son’s account. The search for an existing adult does NOT exist in his account. The only option given is to “create a new adult account”, but the adult already exists. I am attaching a screenshot. 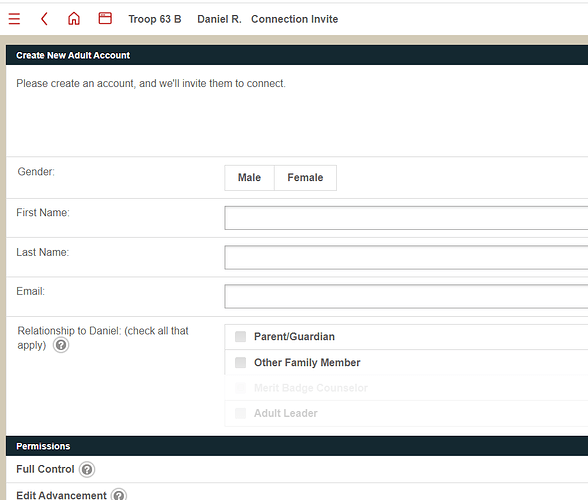 I am also attaching a screenshot for my daughter’s account, where I am ABLE to search for an existing adult in the connections manager. 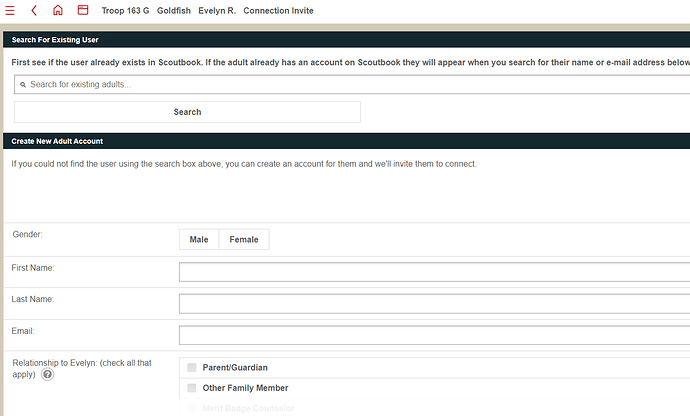 My son is one of 10 AOLs that recently crossed over into our Troop. The other new scouts are also having this same problem with their connection manager.

@EricaSong - how did these scouts bridge over… was the transaction ONLY done in scoutbook, or via my.scouting.org or paper apps ? I ask only because you stated that ALL of them have the same issue. YOU CAN NOT MOVE SCOUTS IN SCOUTBOOK ONLY.

I know that there have been some issues with the Connection Manager recently that were related to a security issue, for which access to the search functionality (among other things) was limited to unit admins.

Are you by chance a unit admin in your daughter’s unit, but not in your son’s?

The Scouts were moved over officially by paper apps and through council.

Oh, interesting. I am the Scoutmaster for my daughter’s Troop, but not an admin for my son’s. So does that mean a parent cannot add more connections themselves?

So does that mean a parent cannot add more connections themselves?

I think not at the moment. One of the SUAC folks will be able to correct me if I’m mistaken.

I understand that the intent is to reduce the restrictions once the underlying security bug is addressed, but I’m not entirely sure what the ultimate permissions structure will be (i.e. back to who had access previously, or some subset of the previous groups who could create connections).

oh, hmmm…he is not in a patrol yet. So they have to be in a patrol to be able to connect to adults?

it should not matter - just guess

The connection search bar has been temporarily removed from non-admins because of a security issue.