Moved a person to Unit Scouter Reserve from the committee. When that was done, an error came up saying that the following members don’t meet the age requirement. Unless his birthday is wrong, the real error is that he is missing the CBC. 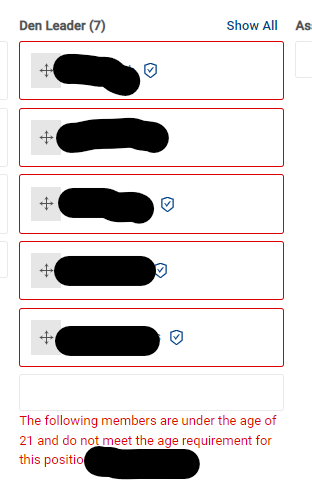 Without a DOB, checks will fail. Also, it appears he has a nickname, not a legal name as his first name. This should also be corrected. The member should be able to correct his first name via my.scouting.org. The DOB may need to be entered by the registrar.

Would it be possible to request a specific error message for when the DOB field is blank vs when the age is outside of the acceptable range (i.e. two checks)? Conceptually:

ETA: Ack. Discord ignored my indenting. I “forced” it with the bullets. I thought that used to work?

That would be nice. Many error improvements would drive people to know what to go fix.

Paper apps require DOB as well. You would think the criminal background check would fail without a DOB.

You would think the criminal background check would fail without a DOB.

I would expect a lot of stuff to break without it. Seems most likely it was there at some point, but got deleted by mistake somehow.

You would think the criminal background check would fail without a DOB.

While his app has his DOB and CBC, the CBC wasn’t entered in the system. It is interesting that the “manual” systems still allow it to be incomplete.

Then we wonder why recharter takes so long. At that point, one must atone for all the sins of the last year.

Yes, thank you for the correction. I have corrected my post (above).

When I asked for the register to fix today, she said she didn’t know how she entered it without DOB. Pretty odd.

She might have searched for the already existing BSA member number. When she found it, she might not have noticed that it was missing DOB.