I’ve entered both the Grand Slam and Triple Crown awards for several scouts and nothing shows up on the awards section for thise scouts. If i didn’t enter these awards myself i wouldn’t know they earned these.

Is there a plan to add these awards to the awards section?

There appears to be at least 2 different programs.
Further research needs to be done.

Would one of those other issues be incorrect reporting on the po? On mine it repeats the award above it for each entry.

I know it’s not a Scout Store purchase so I wasn’t expecting it to show. I definitely didn’t expect it to add phantom items to the po. 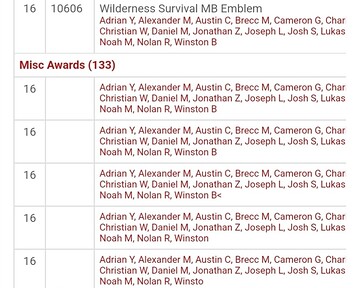 Thanks for the quick reply.

Can you clarify what the issue is with the PO? Ideally something I could copy directly to the developers to tell them.

The attached picture show 5 ghost items on the po under the awards section:

It looks like it’s coping the last item above it, the Wilderness Survival list of names. One of these is a Grand Slam and four of these are the Triple Crown awards.

There is no 16 of each and the list of names are definitely wrong.

I get it - it should not show on PO