Thank you for adding these awards! However, when I entered it for one of our Scouts, the needs purchasing and needs awarding reports have a line where it says the name of the Scout and the date, but does not list the name of the award. Instead of a picture, it just shows the broken image icon.

Also, the award does not appear on the profile page of the Scout. It would be nice and fancy if the image displayed matched the the patch for the correct three adventure bases attended, as the actual award is different based on which three bases the Scout attends.

Also, these awards do not yet appear in the quick entry drop down. Not the end of the world, but would be nice if I didn’t have to go into each Scout’s awards to individually record their attendance. Thanks!

These awards are not at the Scout shop that is why they are not on Advancement Report or Purchase report. They have to be ordered.

It might be helpful to have a small explanation on the award page with the link to the awards website where folks can confirm event/trek eligibility and order the awards. 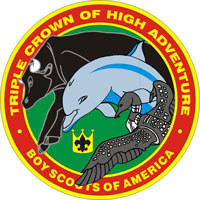 The Triple Crown & Grand Slam of National High Adventure Awards recognizes those Scouts who participate in high adventure programs at the Boy Scouts of America’s National High Bases: Northern Tier, Philmont, Sea Base, and Paul R. Christen (at the...

As for having it on the needs ordering or awarding pages, I would suggest it’s still helpful to list the award by name instead of just incomplete info. I suspect many units, like ours, use those reports to track what needs to be ordered (even if it comes from a different source- which happens often in small councils where it’s a small trading post and we have to make a separate order to a National store), and when the award is presented/awarded.

I agree that there should be a note or link with instructions to order them. With a quick scan, I didn’t find the instructions on that page or any of the links on that page. I probably just overlooked it. Can you point me in the right direction?

Here are some more direct links rather than just the generic homepage.

This is the link to the award requirements, which includes the link to download the latest version of the list of qualifying treks/experiences. Not every trek/experience at each of the high adventure bases is recognized as credit towards the triple crown or grand slam awards.

Note that the process of ordering the awards IS the application. As you place your order, they request information about your qualifying treks, verify them, then approve and ship the awards.

That link seems to have the four combinations of triple crown but nothing for grand slam unless you just have to progress further through the order page?

Sorry, here is the direct link to apply for the Grand Slam.

The four combinations of the Triple Crown award are what I was referring to in my OP in regards to having the image appear that corresponds to the correct award.

Also, it might be helpful to group the awards together on the awards page, instead of being just part of the long alphabetized list.

Would also be nice/helpful if when entering the treks for the Triple Crown, they also populated under the Grand Slam.

I know these are pretty rare awards, so I get that tweaking these may not be a high development priority, but appreciate y’all working on them just the same.

We have added footnotes with a link on each awards page.