When a leader correctly registers as an Asst Den Leader (DA), they show up on the Pack roster with the position auto-created from the My.Scouting application approval. But when viewed from the leader’s profile > Current Positions, ScoutBook will not allow assigning that existing Assistant Den Leader position to Lion or Tiger Dens.

When trying to +Add a new position from the leader’s profile, ScoutBook will not allow assigning an Assistant Den Leader position to Tiger Dens. There is an obvious gap between Lion & Wolf. 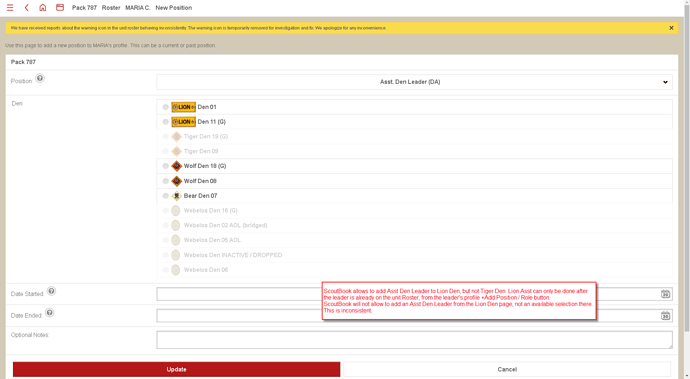 Viewed from the Tiger Den page, +Add Leader button, ScoutBook does list an option for Asst Den Leader in the dropdown, but will not allow the assignment as it is grayed out.

From the Unit Roster +Add New Leader button, ScoutBook will not allow assigning an Assistant Den Leader position to Tiger Dens. There is an obvious gap between Lion & Wolf. 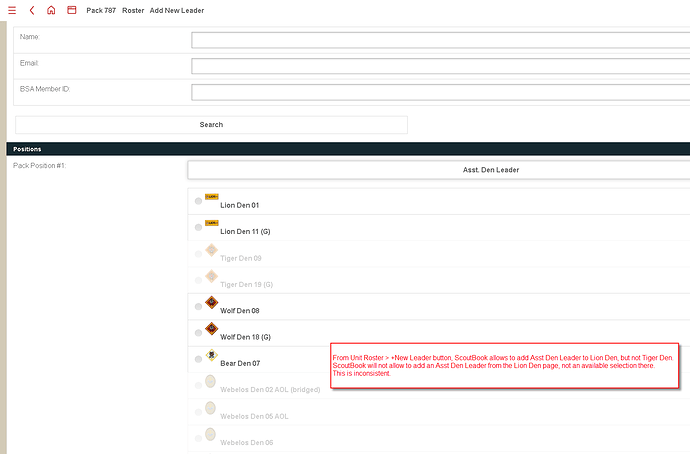 I have discovered that if, and only if, a leader was previously assigned Asst Den Leader of a Lion Den, then the position will remain in effect when that Den is advanced to a Tiger Den.
ScoutBook will not allow assigning an Assistant Den Leader to a Tiger Den by any other means, but it does allow it to exist under a unique scenario. This is probably only by coincidence.

I understand that Tiger Den Leader used to be a separate position, but no reason they can’t have a DA in Scoutbook. Lion Guide was allowed to have a DA without any unique moniker. Especially now since National has vaguely & without announcement discontinued the titles of Lion Guide & Tiger Den Leader, at least the patches are discontinued & ScoutShop tells us they are now to wear Den Leader. It is very confusing to new volunteers when the patches they wear don’t match up with their assignments in Scoutbook, & we have to use workarounds.