@DamonCostello - are the cubs in their respective dens… just thought i would ask. For the app it is a parent only app.

Yes, they are in the correct dens. Cant update either of them.

Is there a specific requirement you are having trouble with? Or all requirements?

@DamonCostello - and the error is on scoutbook.scouting.org. perhaps some bsa id numbers can help figuring out the issue

SOLVED! The larger issue was with completed requirements not updating on scoutbook, which in turn didn’t update the requirements for the conservation award. Apparently, due to a quirk of scoutbook, the requirements don’t automatically update if you don’t select between 2015 and 2016 (see screenshots). In the area circled in red, there were two buttons: 2015 and 2016. When I clicked the 2016 button on each of the problematic badges, they all magically updated and things now appear as they should. I have no idea why this is even necessary as it is now 2023, but this appears to have solved the problem for now. Thank you all for your help! 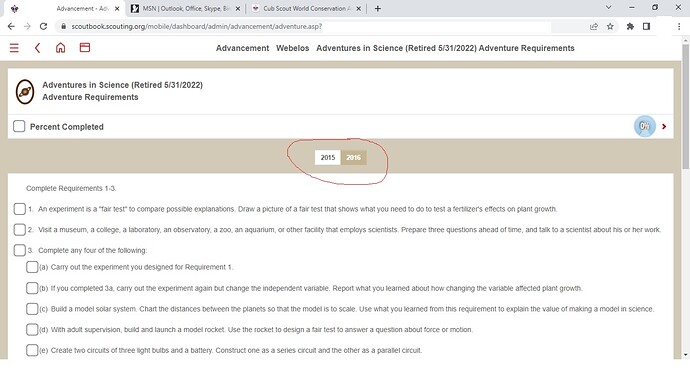 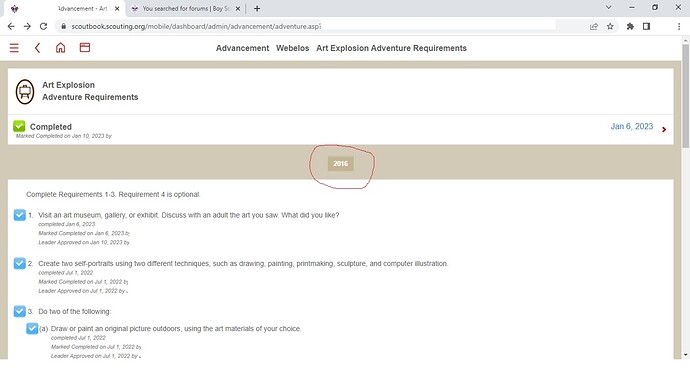 Apparently, due to a quirk of scoutbook, the requirements don’t automatically update if you don’t select between 2015 and 2016 (see screenshots).

Basically, for all awards and advancement, Scouts should work on the latest. The older ones are there for people who earned it in the old version OR are part of the transition period following those rules of what you can continue doing when the new requirements come out.