When I click on Edit Extended Information for a scout in my unit, whether coming directly from my Dashboard (for my son) or via the troop roster (for my son or others I tested), I get a screen that just shows: “Please use edit profile to edit scout information.” I tested it out for several scouts, and I get the same behavior.

ETA: I am a Scoutbook Unit Admin and Key 3 Delegate, all showing as current.

It is expected behavior of there’s nothing shown in that page. For example, they may have already been invited to connect.

That was a bad example because you would only see it on your own child. The webelos scouts would see the working towards toggle, and a venturer sees the scouts bsa advancement toggle. 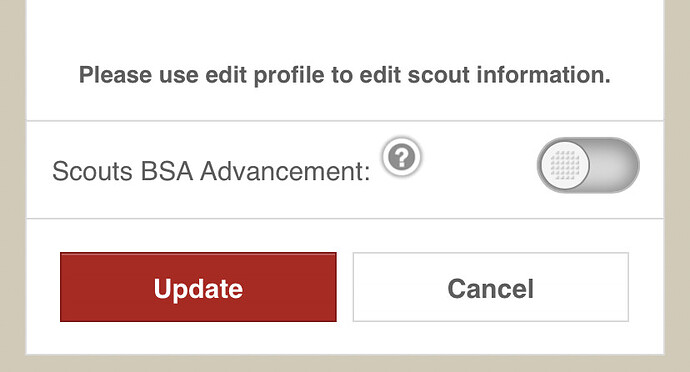 Hunh. OK. That seems like a kinda obscure (to the user) way to manage it, since a user can’t readily tell what’s supposed to be there if it’s effectively “blank”.

I guess it’s not a bug, just an inadequately-documented (IMHO) feature.

ETA: I guess it looks odd because, as a unit admin/K3D, I wouldn’t see the ability to invite a scout to connect (if I’m not their parent/guardian) and unless they happen to be in a crew, I wouldn’t see the “Scouts BSA” toggle. Not being at the pack level, the “Working towards…” toggle would be missing, too.