How do I add the unit leaders digital signature to Scoutbook?

Scoutbook only prints signatures using a script font. There is no capability to upload signatures for use in printing.

with the Scoutmaster’s digital signature

Are you asking about an uploaded signature as @edavignon inferred, or are you asking about how to get a “signature” (i.e. name) to appear in the relevant locations on the cards? If the former, you can ignore the rest of this post. If the latter, there’s potentially some useful information in there, but you might already know some or all of it. 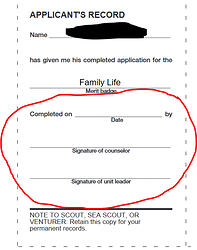 Thank you @CharleyHamilton for your reply and information.
However, I was asking about uploading signatures in a jpeg format.
Thank you to @edavignon for quickly answering my question.