Hi,
In the attached photo the “Webelos Den 4” should be a Lions Den 4. I’m not sure how to set this to Lions.

Also, why is the Webelos Den 00 listed as NULL? 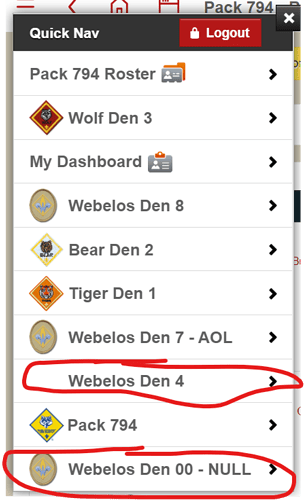 For the one that says Null, I suspect that’s the name that someone gave it. Go into it and click edit den to change the name.

For the one that’s the wrong rank, someone either set it up wrong, advanced it too many times, or it’s an old den from a previous use of that number. You’ll need to click add den and create a new den. Then click the reassign scouts button within the den and see all the scouts that should be in it.

Shoot, last noticed you are on quick nav. That is supposed to be based on pages you have frequently visited, but it has never worked right. I never use it. So, it’s possible those issues don’t really exist on your pack page.

I see the same thing on the unit dashboard too, not just in the quick nav. Where do I check the name at?

As a Pack Admin, go to the Lion Den page in Scoutbook, and then click on “Edit Den”.

Ah ha! Thank you! It looks like we’re using it as a holding spot for Scouts who do not wish to continue. How do you end a Scout’s membership in the Pack if they’ve informed you they don’t wish to continue?

Put an end date on their pack/den membership in Scoutbook.

ETA: You still need to “remove” them from your official roster when you recharter, though.

ETA2: Also, you might consider providing the parents with a PDF copy of the Club Scout History Report and Individual Advancement Report for their respective scouts. That way, if they ever decide to return, the information needed to associate them with the correct record (e.g. BSA member ID) still exists in a reasonably available format. The data isn’t gone in the database, just not easily reconnected without some of the info that’s on the reports.

I’ve looked through a number of the navigation links of the scout’s profile. Where do you set that at?

It’s actually in Scoutbook itself. From the pack or den roster, a unit admin (or den admin for that den) can go to the scout’s name, then select the scout’s memberships. Find the current one, click on it, then add an end date in the appropriate box.

I see that… We’ve already marked an end date in August. When does the scout become removed from the roster, only at a re-charter?

Odd. If there’s an end date on them, they shouldn’t be showing up in Scoutbook at all. Regarding the official roster at my.scouting, you’re correct that it only updates when a scout or scouter is no longer registered with the unit. That typically changes after recharter, but they also disappear from the roster when transferred to a new unit.

If there’s an end date on them, they shouldn’t be showing up in Scoutbook at all.

I think for Scouts, they may get re-added even if marked ended.

Are their memberships maked as unapproved in Scoutbook? (missing the green shield with checkmark)?

Everyone has the green shield. For the NULL den, that was the name of it, literally “NULL”. I’ve renamed it to “HOLDING SPOT”. It appears to be a Den used to keep scouts who’ve said they’re not interested in being scouts any further. Is there a better spot for this? Can you unassign a Scout from a Den?

It would appear as though the NULL den is somewhat following these instructions: How do I remove a Scout from Scoutbook (SB) - Scoutbook Knowledge Base.

Is there a better spot for this? Can you unassign a Scout from a Den?

I think it is better than not being in a den as those “float” below the list of dens if I recall. So, just keep them in there until recharter time.

@RyanHendrickson - i note those dens/patrols as recharter/age out. But certainly the roster at my.scouting.org will still list them until removed at recharter