Has anyone else seen the message ‘Youths do not meet the age/grade requirement for the program’ when validating the recharter for your pack?

The youths listed for our pack are all 5th graders with late 2011 birthdays.

Sounds like they are already 11, or close to it!

I suggest you contact your Council and get SE approval, since they are already of Scout BSA program age.

They are 11 and thus the software is flagging them incorrectly since they are still in 5th grade.
Is SE ‘senior executive’?

I just saw this issue today with one of my units. The pack was able to submit despite the warning stating they would not. All three were already scouts, one just turned 11 and two will turn by years end. All will be 11 at crossover. A forum from 2021 noted that the system would not allow new youth to enter into CubScouts at age 11, but should allow existing scouts to stay and complete the charter.

Thank you for the update.

SE is typically Scout Executive, that being the most senior professional scouter in the council.

Effective April 18, 2022, the Scouts BSA joining requirements have changed. They now state that a young person can be a member of Scouts BSA if they meet any of these requirements below.

And as previously stated, “SE” is Scout Executive. Sometimes known as the Council CEO. They are responsible for all Scouting in your area.

I suggest you contact your Council and get SE approval, since they are already of Scout BSA program age.

This is a bug with recharter, though, no? It shouldn’t require SE auth if they joined cubs at say 10 in 5th grade in September, had October birthday annd are now 11.

The question was a recharter one with at least some cubs already registered.

I know we’re starting to wander into policy territory, but it’s probably relevant that the change says “can” rather than “shall” for the Scouts BSA. It seems like the warning is phrased (although apparently not implemented based on @MichaelHeger’s comments about being able to submit despite the warning) as a “shall” rather than as a “can”.

Reference for the new joining requirements for Scouts BSA:

How old (or young) can a youth be to join Scouting? | Boy Scouts of America

The Scouting experience is divided into five programs according to age and activities. Cub Scouting is for youth in kindergarten through fifth grade. Youth can join Scouts BSA if they are at least 10 years old, currently in the fifth grade and...

Reference for the joining requirements for Cub Scout dens: 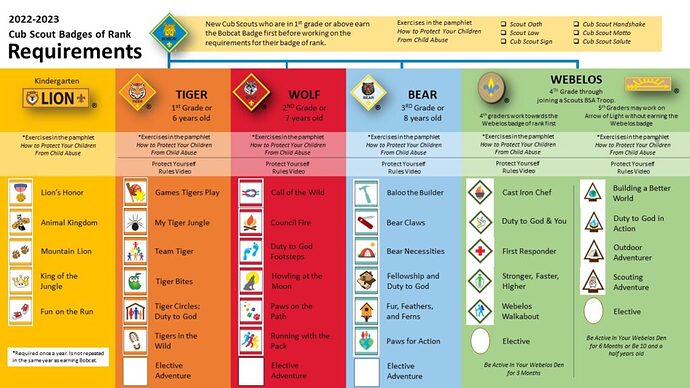 A brief walkthrough of the steps required for youth in grades K to 5 to advance through the ranks of the Cub Scouts.

This is a bug with recharter, though, no? It shouldn’t require SE auth if they joined cubs at say 10 in 5th grade in September, had October birthday annd are now 11.

I didn’t notice the warning on my recharter. It really is pretty bogus. If these cubs are in the 5th grade, and they are working on their AOL, there is no issue. This is normal. It flags 4 out of our 8 AOLs.

So, no SE approval, no action at all. Acknowledge the error and move on. I’d either not have the error, or only show it if the cub isn’t a Webelos? Or not working on AOL? Or not in 5th grade?

Or maybe better yet, it could say something about them crossing over? 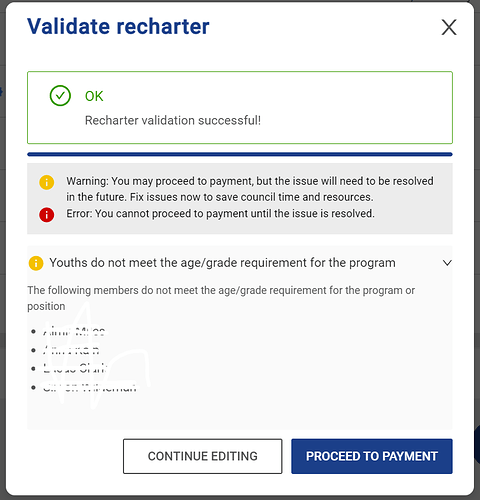 Yes this is indeed a bug and one that was introduced this year (we didn’t see this last year). BSA IT needs to own up and fix this. We commissioners are being bombarded by freaked out Cub Scout Pack leaders that are running into this trying to recharter perfectly eligible 11 year old 5th grade scouts.

I’ve asked the developers to look into this as I agree that a warning that basically every Cub Scout pack in the bsa will get is not a very useful warning.

On that note, I believe it’s just a warning, and they can proceed. Correct?

they can proceed. Correct?

Yes. We were able to proceed.

Yes, but this error basically means every single Cub Scout pack has to manually be verified by their council and will not be able auto-post. Not that we really want any units to auto-post. Last year we had all kinds of problems with units that auto-posted.

Your council should submit a ticket with BSA IT.

Not that we really want any units to auto-post. Last year we had all kinds of problems with units that auto-posted.

Auto post worked perfectly for my one unit. Done on Jan 3rd. My goal is for my 3 units to auto post.

Probably 9 out of 10 units that auto-posted last year found errors after they submitted that they expected council to fix, and there is no way to do so.

Ok. Good to know. The 3 units I’m working with know there are no “do overs”. If you include the Scout and change your mind, they won’t get the money back.