With the addition of being able to add crews to my Ship’s roster, I’ve noticed scouts assigned to a crew now appear twice on the master roster. Is this normal?

Update: when I refer to a crew that is Sea Scouts’ patrol equivalent.

Same unit, single membership. A Sea Scout crew is the same as a Troop patrol.

Look at the Scout’s membership page in Scoutbook to see if there is both a ship and crew
Membership open. If there is, close the ship membership because, as you said they only need one.

@edavignon Although that is not the case in this instance wouldn’t that terminate the scouts affiliation with the ship? I do have scouts registered in multiple units and they are only listed once on my master roster. 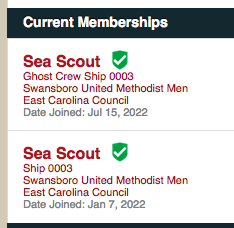 This is your Scouts issue. End the Ship one. The Crew inside the Ship remains.

@DonovanMcNeil Thank you. That fixed it. Strange that when I used the reassign button within the crew roster page it duplicated them on the roster, but not when I used it through their membership page.