Scoutmaster here - used to be able to invite counselors to connect to my scouts. Are no longer able to do so.

It’s possibly related to me being dual-registered in two troops?

What’s the failure mode? The search function isn’t working well/at all depending on the interface, so that can be a roadblock for making connections.

One work-around is, if a counselor is already connected to one scout in your unit, you can use Connection Manager in the Troop Roster to add a generic View/View connection between the counselor and the scout. Then, go to the scout’s Connections page, and change the connection type to Merit Badge Counselor.

Note MBC is grayed out. 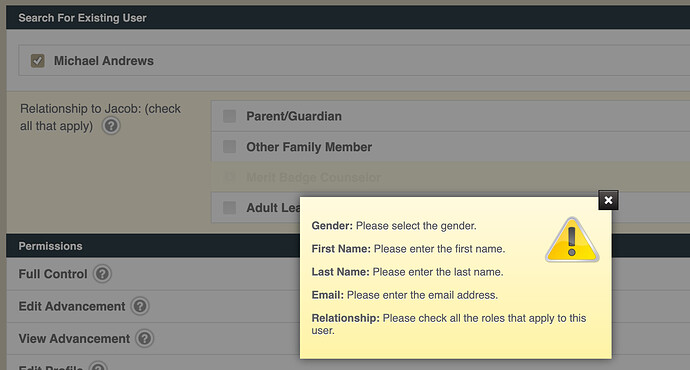 Usually that means their MBC position isn’t current for some reason. When you search the MB name (not counselor name) in the MB counselor list in Scoutbook, does that individual appear?

Have you started the MB for the scout? I can’t connect a counselor (even myself) to a scout for a MB they haven’t “started”.

The only other idea I have is that you’re either getting served the wrong “Michael Andrews” or he has a duplicate account.

Anybody from SUAC on? Maybe one of them can poke around to see if they see an issue with the MBC or your account.

Was there a search bar at the top where you entered the MBCs name? Or did you enter the whole thing under create new user?

The issue is the MBC is registered in 2 Councils, MBC in Golden Gate Area, District Exec in Marin Council. Since he has his Marin Council MID set on his Scoutbook account, you can’t add him as an MBC.

The fix is simply to change the MID on his SB account but we can’t do this without his permission. Marin Council should be able to change it as well.

I wouldn’t want to mess up his DE record for a single Scout. We’ll just use paper blue cards, I guess.

Interesting that his record says he’s working with six other scouts. Is that because we are in a different council than those scouts? It seems like Scoutbook is working for some for him…

I suspect he was connected to these Scouts as an MBC before his MID was switched in Scoutbook. From what I can see, it appears he only uses SB as an MBC so I would not think switching is MID back would be an issue.