I’ve keep getting through the majority of the slides then I get a 494 page error when “traditional weather signs” should be starting. Very frustrating because it takes 30 min to get to the crash point and then you have to restart the training from the beginning.

Update
In frustration I walked away for about 30 min and the hurricane slide came up. There was no sound and no CC. The continue button eventually appeared. It took about an hour of additional waiting but the other slides eventually came up until the training completed. No sound and no CC. Same issue using safari, chrome, and duckduckgo browsers.

The 424 (Failed Dependency) status code means that the method could not be performed on the resource because the requested action depended on another action and that action failed.

Need to know if individual is running latest version of chrome or edge when taking the training.

@StevenKurtz2 could you please tell me what browser you are running, and the OS you are running it on? Plus we need to know if you have the latest version of Chrome or MS Edge?

Same here - almost done with training and the weather video keeps crashing with a 494 error message. Im doing this in Safari, but looking at the answers it seems like Chrome doesn’t work either. Can anyone clarify? Trying to finish up before 12/1, thanks.

@AnneHitchler - Please use the latest version of Chrome and on a desktop if you are having issues. I also suggest using an “Incognito Window” so you don’t store or use cache.

I am having the same problem. I have tried completing the training on Mac/Safari, Mac/Chrome and also on PC/Firefox. All my browsers are updated to the latest version. I have not tried in incognito mode, but earlier posts suggest this doesn’t work. It is most frustrating that this module doesn’t save your progress and you must start from the beginning, EVERY SINGLE TIME. Having attempted this four times now, I’m hesitant to try again until there is a known solution. Thanks in advance to anyone who can help!

@MeganFranklin where, exactly, is the error happening in the training?

lots of details here, not sure why it was marked resolved… SCO_800 HAZARDOUS WEATHER TRAINING - bug - #42 by RonaldBlaisdell

This didn’t work either. Now it’s just a blue screen in Chrome after the flash flood training.

I’m getting the same results. I’m trying to get trained to be an assistant den leader and I’ve sunk hours into this single class at this point. I have retaken the course over ten times and I keep getting stuck with a blue screen randomly while working. It happens in Firefox, it happens in Chrome, it happens on my phone and on my PC. I haven’t tried it on my laptop running Ubuntu yet, but that might be my next attempt. With the number of people reporting issues, perhaps pulling this course should be considered and alternate methods of delivering the content should be considered? I have no problem taking an assessment; I’ve viewed this course enough times I could likely pass it in my sleep. 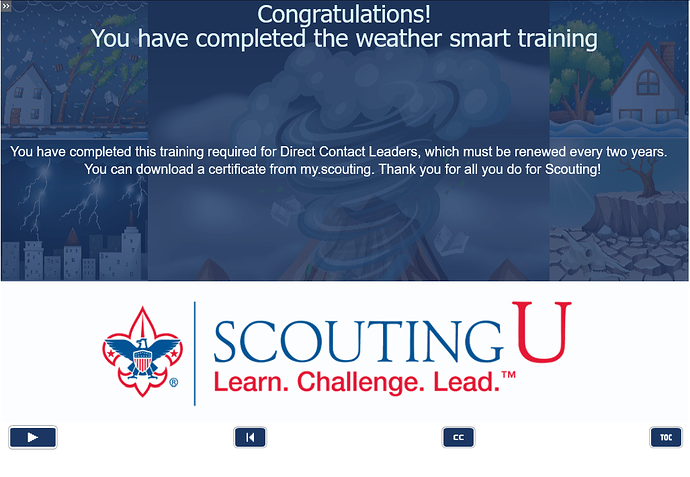 If you open the frame in a new window you can complete the training, but it doesn’t show as being completed on my “My Trainings” screen.

@ChristopherEide - opening a new window will negate the SSO relationship to your MYST Account… that is mis-step number one. The next is what your desktop video settings are on along with browser view/zoom settings are. I will retake the course tonight and post my findings but I am certain to have zero issues.

Just retried it from the beginning and screen recorded the session. I uploaded to Google Drive and the failure can be viewed here: HazardousWeatherTraining.mp4 - Google Drive

I tried to look for the recursion (not sure if it’s a case of an infinite recursion or just going “too deep” in terms of number of recursions; I’m pretty sure Firefox is pretty limiting in terms of number of recursions allowed compared to other browsers), but it’s listing “line 35” and the entire script is written on a single line without any newlines, so that information is of limited utility.

The first script looks like a library used for loading external code. The TypeError saying that a class is undefined might suggest that the library is looking for a class in external code and failing to find it, resulting in being unable to instantiate a new instance of whatever class it’s looking for. Is the console referring to “r.methodName” normal? I’m thinking that it’s trying to call the method on an object that never got created because the library couldn’t locate the class definition. Maybe the programmer chose to use recursion rather than a while loop to “keep trying” and that’s causing the program to hang and throw the error?

Sorry if I’m off base with any of this; I live in .NET world, not generally in Javascript.

From the error messages, this training appears to have been built using: