This weekend the Needs Approval report started showing Eagle Palms for any scout who had earned more than the minimum requirement, even if they were First Class, Star, or Life rank. When I checked the palm requirement, it did not show them complete, but the report show it marked completed by BSA Administrator on different dates, ie. 5/7/2022 for one scout. We have 15 scouts in this situation, and it’s potentially confusing for scouts and adults. I should note that it’s the requirements that are marked completed, not the actual Eagle Palm. It would be difficult to ignore these until the scout has actually earned the Palm.

ETA: Oops. Missed the clarification in the second-to-last sentence. Sorry about that.

That’s not quite what I’m seeing with my scouts. It’s showing the Eagle Palm #X Requirement #4 as being Completed by BSA Administrator. I agree that the dates are odd, and the behavior is inconsistent among the palms.

For example, my scout with BSA ID 130827024 has 34 “extra” badges beyond Eagle (excluding some not-yet-completed required MBs). That amounts to six palms worth of merit badges meeting Requirement #4, plus 4/5 for the seventh palm. However, only Palms 1, 2, 3 and 5 show as Completed by BSA Administrator in the Needs Approval report (i.e. #4 and #6 are not being shown as “Completed”). All of the ones shown in the report as Completed show the same completion date (i.e. matching the most recently Completed MB), even though that MB is assigned to the partially-completed seventh palm.

It’s weird behavior all around.

Seeing the same issue with 3 Scouts in our Troop. Noticed it on the needs approval report. Shows BSA Administrator marked as completed and approved. 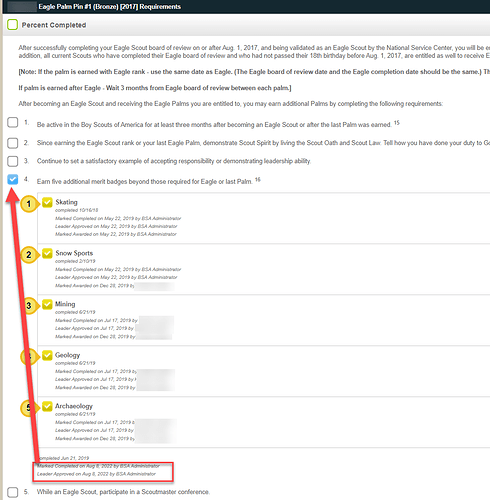 I don’t view this as a problem. Approving the MB requirement is just a formality. It does not matter if it happens before or after the Scout earns Eagle. No one checks when requirements were approved.

I don’t view this as a problem.

I don’t disagree regarding the presence of the requirement for approval. In that regard, it’s like any other requirement that is completed in advance of when “needed”. Rather, my concern is with the inconsistent behavior of the system (i.e. some of the palm Req. #4 are appearing as Needs Approval and others are not).

Is there a known issue that would be causing some (but not all) of the requirements #4 (for which there are at least 5 completed MBs) to be marked as Completed by BSA Administrator and therefore appear in the Needs Approval report? In the test case I noted above, I couldn’t readily find an explanation as to why Requirement #4 for Palms 1, 2, 3 and 5 are being marked Completed, but Palms 4 and 6 are not.

If the MBs are marked Completed/Approved/Awarded individually, shouldn’t the #4 requirement be some auto-approved fashion?

That’s a good point, but why is this just now happening? Was there a change in ScoutBook and how it handles Eagle Palms?

Looks like there was a recent change in this area in the changelog.

Certainly is confusing when you have non-Eagle rank Scouts showing up with items for approval for post-Eagle Awards.

…but this occurs all the time with other ranks (e.g. completion of First Class requirements before fully completing Second Class). I get that people (me included to some extent) tend to view Eagle as different from other Scouts BSA ranks, but in practice it is only different in terms of the scope of effort to complete the requirements. The “mechanics” of marking requirements complete is essentially the same, and therefore the mechanics of marking requirements for advancement/recognition post-Eagle also will be substantially similar.

What is the case for needing approval anyways? The individual merit badges were leader approved and awarded to Scout, why is another approval required? Scoutbook already captured the first 5 elective MB and even the capture clearly shows “BSA administrator” marked Palm1#4 as Leader approved. What would the Troop need to mark it as?