My son, using his youth account, is not able to view the Troop Calendar. We logged in using his account, went to My Calendar, and then selected the gearbox in the top right. The menu shows the Pack he is associated with (he is a Den Chief), it shows all the dens, and it shows all the Patrols for the Troop he is in. It does NOT show the Troop level calendar itself though. Any thoughts?

This is in the scoutbook web interface, right, not the Scouting app? That would be a different potential set of issues to investigate (and a different development team to notify).

Scrolling back-and-forth in the gearbox doesn’t show the unit calendar, either? Does the troop calendar appear in the list of calendars to which he can subscribe below the main calendar display? 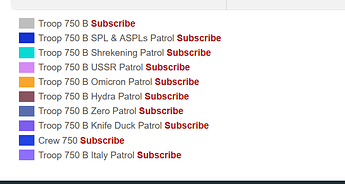 If not, that may suggest that there’s something messed up with his unit membership, although I would think that would mean he couldn’t see the patrol calendars, either.

If you post his BSA ID (no names please!), the folks from SUAC may be able to see if there’s anything odd about his account that could point in the direction of a cause.

Correct. That was using Safari on a Mac and also Safari on iPhone. I scrolled the list multiple time with multiple login/logouts on both devices and still nothing.

No, the calendar did not appear on the bottom left list to subscribe. That’s actually what I was there for (to grab the troop URL and set it up on his smartphone).

It just so happens that the issue just fixed itself somehow. I did cache clears which I doubt would’ve fixed the issue because it was reproducible on 2 devices. The other potential thing that may have done the trick is that I removed his Calendar Editor position under his leadership roles.

Sadly, the BSA websites tend not to play well consistently with Safari, so I often point folks at a different browser to see if that resolves the issues.

Yeah, clearing cache often fixes stuff, usually because something that got stashed by one or more of the scouting.org sites. If it’s been a while between clears, I’ve even seen it happen one more than one machine. Plugins can similarly be an issue (e.g. antivirus) that recur across machines because folks tend to use the same plugins on different machines (assuming they’re available).

Having Calendar Editor set shouldn’t have broken something, but it’s good information for the SUAC folks to pass along in case it’s reproducibly breaking calendar items. Was he set as a Calendar Editor for the unit calendar, or one/more of the others?

I’m pretty sure he was set for the unit.

The whole thing was very strange. I actually still had a session logged in on a different machine and it was still having the issue, but a reload of the page fixed it (this was also after the Calendar Editor thing.

Thanks for chiming in. If I ever find a way to repro it i’ll update this thread.