Advice on how to correct this?
Primary troop had recharter issues due to the BSA lawsuit but that seems to have gotten settled last week as well.

I did find a 2nd Scoutbook account for him which I have merged into his primary account.

Yes the two troops are correct
I just erroneously created a duplicate account in 505 trying to re-add him back to his patrol in 505 because the end date of his membership in 505 was uneditable (128 is the new troop and I figure they will connect him to his new patrol in 128). Friday he had been unconnected to his patrol in 505 so I made that correction and today he was inactivated and is not linked to his patrol again in 505

You will need to speak with the unit leaders to have him placed back in his patrol.

Confused what to tell them? His membership appears expired? See screenshots. Our unit really doesn’t have a full understanding of scoutbook and seems like a scoutbook issue 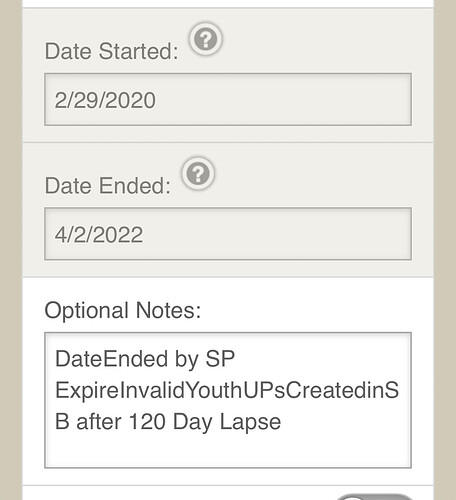 This message appears if he does not have a registration in that unit.

You can check this in my.scouting.org on your own account. Look under My Applications, and there you should see your Scout’s active memberships.

Let us know what you see…

I only see this. I was previously commitee chair and see two apps I processed for two other scouts that are not my child. 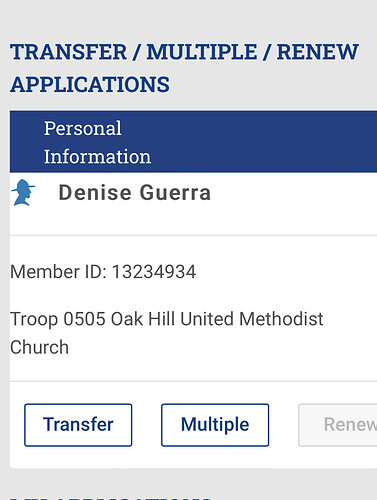 Can you see your child under your own name there?

The name R is my membership, and the name Q is my Scout

Also, if the issues got settled just last week, your registrar may still not have had time to put in the recharter…

I requested a position sync from Akela to Scoutbook. Check again tomorrow morning.

No. I don’t see his name at all

OK, that means the charter has prob not gone thru…if the primary unit was the one with issues…

And not to worry about the BoR. As long as you paid the Scout’s membership fee for this year, you go right ahead with everything as if the electronic records don’t matter.

Log it all in the back of the Scout Handbook (take a pic of it on your phone for record), and put it in the system when things catch up.

Never hold up a Scout because we adults cannot get our act together with bankruptcies, charters, applications, Scoutbook, Internet Advancement, etc…

Spoke with registrar this AM. Looks like he was transferred out rather than dual enrolled in both troops. Registrar is fixing it and hopefully everything will sync back up by tomorrow

I checked this morning because there are some overnight processes that need to run after a registrar makes a change. As Jennifer found, your son is still only registered in T128 and not T505. You will need to contact your Council registrar.

Got it thank you!
I spoke to the registrar Monday and she told me she had fixed it. So I will call her again. She confirmed my scout was on the recharter for T505 and had processed the dual app for T128 as a transfer rather than dual.
After our conversation T505 membership appeared was open/editable rather than closed as it had been previously in SB so I thought it had been fixed causing my confusion.

Just spoke to registrar
She had only turned in a ticket to nationals to reflect T505 as his primary? But she said she has now updated his membership to dual. Will check back tomorrow. Thank you so much!