My Scout (12354283) suddenly stopped getting emails from Scoutbook in December of 2021. I have checked the email address and it is current. Also, when the SM sends him a message and his email shows up correctly when it copies to me.

I am an ASM and have full control over his account but can’t find anything that should be preventing him from getting email.

Go in and add +1 before the @ @RamseyHollander

Are you saying when the SM sends a message without BCC checked that your son’s e-mail address is in the To: list and is correct? If this is the case, you will need to check his spam folder.

Yes, that is correct. We have looked in the spam folder and they are not their either.

For gmail and a number of other email systems - it creates an alternate email to use but ends up in same email box - so you could make +scouts, or +work - but I have seen adding the + fix the issue in SB before

Hmm, I tried that and it didn’t work. He didn’t even get the email to get a verification code for the change. I did a test and sent an email from scoutbook to him and his Mom with BCC turned off, both his Mom and I got the email and we can see that his address his address is correct.

I also sent him an email from my gmail account and can confirm that he is getting emails, in fact he finds out about Scout stuff when someone uses “reply all” and he sees the original email.

So I don’t think it is his Gmail account, everything looks normal there. This is quite important because we use it as a primary Troop communication and he is missing stuff.

I sent a test message from his SB to his Mom and I’s gmail and we did get that. It looks like he can send but cannot receive but his email address is correct and when people use reply all he gets those.

I just whitelisted @scouting.org per those instructions. Still not getting test emails. His Mom and I both get them.

This change occurred on January 23rd and we didn’t change anything to induce it. That was the last email he got from Scoutbook.DoNotReply@scouting.org. Everything after that has only been him getting the message from someone using reply all.

The @scouting.org domain was whitelisted and it did not fix the issue. There are no filters set up in his email account to block anything. This is something on the SB side.

I created another filter to white list Scoutbook.DoNotReply@scouting.org specifically. Still no emails coming through.

Could you test it again now?

Still not getting anything to that email. Same situation, with blind copy turn off I can see his email address is correct.

And when you (the parent) reply all to that email, you scout receives the reply?

Yes, or when anyone uses reply all. Then it just becomes another email from an individual rather than something from Scoutbook.

Also, he doesn’t get emails from SB even when sent from his own account. It is the weirdest thing that this just stopped all of the sudden.

Then it just becomes another email from an individual rather than something from Scoutbook.

That behavior really sounds like some sort of either filtering (e.g. auto-filing in gmail or the mail reader) or blacklisting (either by the recipient or the ISP) going on. It’s probably worth sitting down with the scout to watch what’s going on when an email gets sent, and then watch them hunting for it. I had a scout who wasn’t getting messages for weeks who (it turned out) had set up a filter that automatically archived all of the messages coming from Scoutbook. He insisted he didn’t even know how to create filters, but the auto-archiving filter was there when we looked, and so were the messages when we toggled the display from Inbox to All Mail: 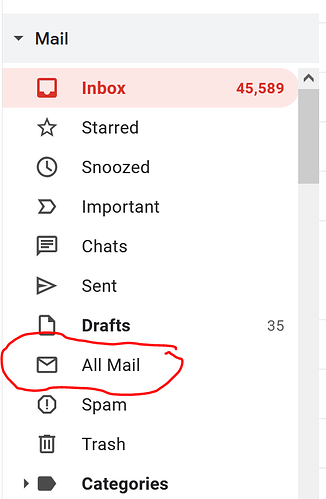 I am doing all of this on my own. I have his login information. I have checked filtering, no filters set up.

I have his gmail password and have sent dozens of tests to him and his Mom. Mom and I both get them and he doesn’t. Again, no configuration changes and January 23rd we stopped getting mail to his account.

They are not in “All Mail” or “Spam” There is no tagging set up. He is on the same wifi as Mom and I so there is no way it is blocking SB at our firewall, it would block it from us as well. To be sure I also set up a mobile hotspot and sent tests from that, same result. This is 100% a SB issue.

I have been a CM/ASM for 7 years now and am the Troops SB admin. This is a SB issue that we need to get solved as he is missing troop responsibilities that his SM assigns him. We are a very “Scout led” Troop so when someone doesn’t get their action items the entire Troop misses out on activities.

Is there someone I can call for support that is on the back end?

@RamseyHollander it is a matter of logic - you KNOW the emails are going to him from Scoutbook - you have seen the address on them - this is not a SB issue - it is something??? on the user end - Scoutbook is adding the address to the emails. SUAC has erased and re-entered the email address several times.

Is Spam filtering turned on High or something? SB Emails have VERY high Spam scores usually.